Notes from the Future War – The Terminator Series

Terminator 2: Judgement Day is arguably one of the best sequels ever made.  It took the concept of the low-budget science fiction action film The Terminator and advanced the story in many ways while providing a similar story beefed up so that all the familiar elements were done bigger and better.  Director James Cameron worked with a then-record-breaking $102 million (which is less than half of the budget for the upcoming The Lone Ranger with Johnny Depp as Tonto–let that sink in for a moment) and created ground-breaking effects with the T-1000’s morphing liquid metal.  But more than anything, this film developed strong themes (fate is what you make) and made you think as well as feel.  So what happened with the next two installations?

The rights to the Terminator series is long and convoluted.  Cameron and producer/co-writer (and soon-to-be wife, later to be ex-wife) Gale Anne Hurd sold the rights to the original film to Hemdale Film for that company to fund the film.  Hurd’s production company Pacific Western retained certain rights, so when Hemdale went belly-up and sold their rights to Carolco Films, Hurd had to be involved for a sequel to be made, even though by then she and Cameron were history.  Regardless, she refused to do a sequel unless her ex was at the helm.  Working out these deals is what caused T2 to take seven years to be made in a time when sequels were being churned out on a regular basis.  This probably helped the film because the technology was right to do what Cameron wanted to do with the story (thanks in part to the CGI water tentacle from Cameron’s The Abyss).  Two things kept a third movie from being made in a timely manner: 1) Cameron finished the story he wanted to tell, and by changing “history” in the context of the story, there was no need for a further installment; 2) Carolco was incompetent with finances, and despite the fact that T2 made more than a half a billion dollars worldwide, the company went bankrupt and sold off their assets.  Cameron retained sequel rights, but of course never planned on doing a sequel.  However, he ended up marrying the movie’s star Linda Hamilton and then divorced her.  In the settlement, she took the rights and ended up selling them back to Carolco creators Mario Kassar and Andrew Vajna.  They created the company C2 Pictures and pushed for a sequel, but could not get Cameron on board and didn’t know if Arnold Schwarzenegger would be interested without the director. 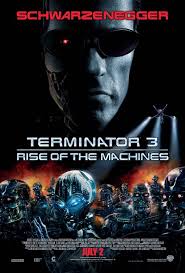 By 2002, C2 was able to go into production with Terminator 3: Rise of the Machines, which, as previously reported, is a misnomer since the machines never actually rise in this film.  Instead, we got a retread of the first two films with yet another terminator (again, played by Ahnuld) is set back in time to protect John Connor (the second time for him) while yet another terminator model we’ve never seen before (this time a woman) tries to kill the future leader of the human race.  The first 2/3 of the movie was pretty standard and didn’t do anything to advance the story except have Sarah Connor dead and introduce John’s future wife, Kate Brewster.  It was only in the last third of the movie where things got interesting.  It seems that the “fate is what you make” message in the second film was utterly wrong and it didn’t matter what you did because it would just delay the inevitable.  Yes, Skylab was still launched and went online, just a few years later than expected.  The Terminator managed to save John and Kate, while of course giving his “life” in the process yet again by hiding them out in a nuclear bomb shelter while the nuclear war finally occurred.  Shouldn’t this movie have been titled Judgement Day and save Rise of the Machines for a movie where the robots actually took over?

T3 made money, but didn’t go over well with die hard fans despite generally good reviews.  What the fans wanted to see was the Future War, as glimpsed in all three of the movies.  The time travel plot point was really beside the point at this point.  Once was cool, twice was pushing it but accepted, three times was yawn-inducing.  We wanted to see John Connor as a strong post apocalyptic leader fighting against the killer robots, not a whiny brat John or a homeless fatalistic John.  Give us the John we’ve been promised!  Nineteen years after the world saw its first Terminator, we finally got it.  Sort of.

Terminator Salvation was finally made as a possible first entry in a new Future War trilogy.  The idea was to have John Connor a background character, more of a mythological character than the film’s hero.  He hasn’t quite reached the point where he’s mankind’s savior, but we know that will come in later sequels.  Except it wouldn’t, because the original plan was to have John die at the end.  The movie was to focus primarily on Marcus Wright, a prison who died before Judgement Day and gave his body to science–specifically to be used by Cyberdyne as a test subject for their first cyborg.  He doesn’t realize that he’s a machine/human hybrid until late in the film, and after John is killed, he takes over in form as John so that the real human leaders against the machines is a machine himself.  Things didn’t go as planned.  Christian Bale was offered the role of Marcus, but because he apparently didn’t realize that Marcus was the real protagonist, he insisted on playing John Connor.  This caused a major rewrite where John’s role was increased, thereby reducing Marcus’s screentime (and importance to the plot).  Of course, the original ending was re-shot so that John miraculously lived.  Fan reaction was split.  While finally getting the Future War, many people were disappointed with what they got and were confused by the jumbled plot.

In defense of Salvation, director McG (it’s hard to take someone with that name seriously) did his best to hold true to the mythology of the series.  He was painstaking in making many visual references to what came before, and made sure that this followed continuity with T3, even though they could have very easily ignored it (after all, it’s been done before) and simply made the story take place in the original timeline.  But no, Kate was a character and John said that this wasn’t the future his mother told him about, acknowledging that things had changed (much like J.J. Abrams’s Star Trek, which also featured Anton Yelchin taking over a well-known role as a younger version of the character).  This is fine as it allowed the filmmakers to do anything with the story–for instance, John could die.  This actually gives some suspense to a film that otherwise would’ve been predictable.  Other things McG did right was to create a specific look for this film different than the others that came before.  The robots were cool as well; a giant walker called the Harvester was far better than the Transformers.  There was true imagination put into this entry, unlike the one that came before it.  It honored the previous films and took its role as keeper-of-the-torch seriously.  While not giving fans exactly what they expected regarding the Future War, it set the stage for more adventures, hopefully leading up to the events discussed in the original–mainly the machines sending back the original T-800 and then John sending his own father, Kyle Reese, back to protect his mother.  Finally, Salvation proved that a Terminator movie didn’t need Schwarzenegger to be good.  In fact, by the third film, he was looking too old for an non-aging cyborg and his presence felt obligatory.  Salvation did include the Ahnuld T-800 in the climax using a body double and his face CGI-lifted from the original.

So now where does the series go from here?  Kassar and Vajna sold the rights to billionaire heiress Megan Ellison, who intends to produce a Terminator 5.  This means that any plans McG had to continue his saga will be nullified.  Fast Five director Justin Lin was tapped by Schwarzenegger himself to direct, but bowed out to direct the 6th and 7th installments in that series.  Of course, the news hidden in that statement is that Schwarzenegger will be the star…again.  The question is, will he play another T-800 going back in time yet again to protect someone in the Connor family (perhaps Sarah’s mother this time?) or will he be a robot in the future?  Maybe he could be the human they based the T-800’s on, though that didn’t work out so well when they planned to do that in T3.  As a man in his mid-60’s, does he have what it takes to be an action hero in another Terminator film?  Will such a film even fit into the continuity, or do the filmmakers even care?  Let’s face it, at this point, they can do anything they please and people will pay money to see it, for nothing more than out of curiosity.

Schwarzenegger’s involvement is disturbing.  He took eight years off from acting to be California’s governor.  In that time, he has aged and become flabby.  He will really have to work hard to get back into shape to be believable as a killing machine, unless they recreate the original T-800 with CGI.  He seems interested in trying to make a comeback, with production starting on his newest film Last Stand.  This urgency to revisit his prime may end up in a rushed production on T5.  It doesn’t give one confidence with Justin Lin being the first choice as director, either.  The Fast & Furious movies may be competent escapist action flicks, but Terminator needs a filmmaker with a vision.  Additionally, it needs screenwriters who care about the series and can not only write violence action set pieces, but deliver strong characters, a plot that ties into they mythology, and meaningful themes.  Even Salvation dealt with what it means to be a human.  T5 can’t be a vapid action blockbuster–it has to be something that rises above mediocre sequels and reaches the audience much in the same way T2 did.  Of course, there’s no way that it’ll ever be held in the highest esteem as that film is; what sequel can?  But it can aspire to great heights.

Give us the Future War.  Let us see humanity duke it out with the evil machines.  Produce a smart screenplay.  Have John Connor be front and center and be the hero we’ve heard about and have yet to fully see.  Cast Christian Bale again so we don’t have to get to know yet another actor in the role.  Advance the continuity already established, whether you like it or not; to rewrite history again would be a cheat.  Throw a new twist at us–the T-1000 blew our minds, the Terminatrix was an interesting if not fully realized idea, and the hero actually being a machine was innovative if not terribly surprising in the way it was revealed.  Do not do a retread, especially another time travel plot.  That will alienate the fans and cheapen the series.  It’s too much to ask for James Cameron to return as he has another Sam Worthington sequel to work on.  Perhaps the filmmakers of T5 can ask themselves WWJD: What Would Jim Do?

2 comments on “Notes from the Future War – The Terminator Series”