Old TV Shows That Surprisingly Have NOT Been Turned Into Movies

Hollywood turning old television series into motion pictures has gone from being a cliché to expectation.  FilmVerse has alread talked about classic shows that were made into movies with the original casts and science fiction movies that became TV shows as well as comparing a TV show with the movie it spawned.  In looking at TV shows that have never been made into movies, a few surprises cropped up.  Here are ten shows that seem to have been no-brainers in exploiting them on film, but for some reason have been overlooked by studio execs.

A big-budget version of the cool ’60s spy show (developed in part by James Bond author Ian Fleming) had been in development with Steven Soderbergh attached to direct and George Clooney starring.  However, both have since left the project, sending it into development hell.  An updated telling of the exploits of Napoleon Solo and Illiyan Kuryakin could easily be the next Mission: Impossible with the right cast, screenplay, and director.  Or it could easily go the way of I, Spy, The Mod Squad, and The Avengers (the non-Marvel one).  It’s easy to understand why the studio wants to take it easy with this film and not rush it into production without all the proper elements in place.

The premise is typically ’60s sitcom silliness–a befuddled guy discovers that his horse can talk and wackiness ensues.  It’s not really that easy to translate a sitcom into a movie–The Brady Bunch had to make fun of its source material and The Beverly Hillbillies failed because it was too close to the slapstick comedy of the original despite an all-too-perfect cast.  But it seems that a lot could be done for a big-screen version of the story of a wisecracking horse, especially if someone like David Arquette plays the title character’s owner, Wilbur.  You’d think that the same people who put out the endless Dr. Dolittle films, Mr. Popper’s Penguins, or Hot to Trot would jump on Mr. Ed and ride it all the way to the bank.

Back in the ’90s when the movie industry first realized it could make a mint mining television relics, there was speculation that it was just a matter of time before one of the best-loved sitcoms of the ’60s would get the big-screen treatment–Gilligan’s Island.  Fans everywhere had fun casting the cast and crew of the S.S. Minnow.  Two decades later, and the castaways still have not surfaced in the multiplex.  This one is tricky, because how do you rise above the cheesiness and decidedly inane concept of seven people living on a deserted island in grass huts using cocoanut-based technology?  Casting would have to be spot-on with great chemistry, but getting the tone right would be tough.  Get Smart was successful in updating its own concept while respecting the original, but in that case the original show was fairly intelligent–Gilligan’s Island is just the opposite despite being a guilty pleasure.

I Dream of Jeannie

The ’60s was a great time for high concept sitcoms, and of the two competing shows featuring magical women married to mundane men, only Bewitched made it to the big screen.  Despite a pitch-perfect cast (well, except for Will Ferrell), the plot was ill-conceived, dramatizing the back-stage shenanigans of a remake TV series of Bewitched using a real witch as the actress playing Samantha–except for the fact that all the supporting magical characters from the original show are actually the actress’s real-life relatives, or some nonsense like that.  It would seem that some studio would jump on the chance to do I Dream of Jeannie as an accurate remake.  Certain aspects would have to be updated–for instance, would contemporary audiences really put up with a woman being enslaved by an American man?  A twist could be that Tony Nelson recognizes this as a problem and tries to give Jeannie her freedom, but due to some genie rule is unable to do that; in fact, that could be the primary conflict in the film.

No one said making any of these TV shows on this list into movies is a good idea, just that it’s surprising that it hasn’t already been done.  Such is the case for The Partridge Family, which served as an early ’70s vehicle to make David Cassidy a teen heart throb in the tale of a family led by a single mom that is a traveling pop band.  Nothing much has changed with this type of marketing, hence we have High School Musical and Justin Bieber.  It would seem that resurrecting this 40-year-old cheese would give studios an opportunity to create a new sensation among the tween set.  They already tried to do a reality show to choose a new cast for an updated series that never made it past the pilot.  Heck, why not actually put Bieber in the Cassidy role?  Can’t you see Danny Bonaduce being recast as band promoter Reuben Kincade?

Author’s Note: If this becomes a reality, I whole-heartily apologize to the world.

Real life husband and wife acting team Martin Landau and Barbara Bain, late of Mission: Impossible, starred in this science fiction adventure about a nuclear accident that propels the moon out of Earth’s orbit, taking with it hundreds of people living on a lunar base.  It only lasted two seasons and was not as well-known as Star Trek or even Lost in Space, but still offered some compelling stories–at least in its first season, when the show explored more philosophical questions before degenerating to standard action-oriented storylines in season two.  Obviously, the title now is somewhat out of date (not unlike 2001: A Space Odyssey, which inspired this show’s production design).  Perhaps renaming it Space: 2999 would be necessary.  Regardless, a big-budget special effects extravaganza exploring what would happen to a colony on the moon after a disaster spirals it into the depths of space could be a huge hit at the box office.  Just please, don’t let Michael Bay anywhere near it.

A TV remake of The Bionic Woman was attempted a few years ago, but what’s inexplicable is that the original was a spin-off of The Six Million Dollar Man, which has not been remade itself.  The Farrelly Brothers were talking about doing a comedic take on the story of an astronaut who was nearly killed in a crash and had a good portion of his body replaced with high-tech machinery before being recruited into the spy game (do we really want to know what the Farrellys planned to make bionic?).  A movie was made from SWAT and Starsky and Hutch, but this well-loved ’70s series has been largely ignored.  Why not go the summer blockbuster route with this with someone like Chris Pine, Chris Evans, or Chris Hemsworth as the lead (or any other Chris that can lead an action special effects extravaganza)?

With superhero movies dominating the box office, it would seem obvious to adapt superhero TV shows as movies.  The Green Hornet was a short-lived television show, but it got the big-screen treatment.  The Greatest American Hero lasted three seasons, even if it struggled through the ratings in each one.  It still became a cult hit, telling a tongue-in-cheek story of a meek high school teacher who finds a suit left behind by aliens that gives the wearer superpowers.  He teams up with a hard-nosed FBI agent to stop bad guys.  The screenplay practically writes itself.  Imagine Jon Heder as the titular non-hero paired with Keifer Sutherland. 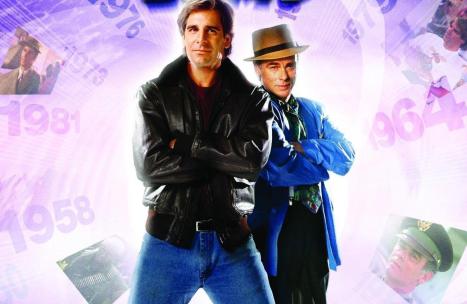 Wait, wasn’t this remade already as Source Code?  Maybe not officially, but the concept of a guy leaping through time and into unsuspecting people from the past worked great in the ’80s and can work as a feature film.  The wonderful thing is that a feature film doesn’t even have to rely on special effects since most of the stories in the TV show were about people and their problems which Scott Bakula and a hologram of Dean Stockwell had to fix problems with history.  Like The Twilight Zone and Star Trek, the writers used a science fiction situation to develop themes about social issues, though it’s likely a feature film would forgo these themes for action and visual effects.  Nevertheless, why hasn’t this show leaped into the movie theaters?

To be fair, this action-oriented show about a souped-up helicopter was a knock-off of the movie Blue Thunder, which had its own failed TV spin-off.  A feature film of Airwolf could be done in the manner of Mission: Impossible or SWAT with new characters taking over the story; let’s face it, Jan-Michael Vincent may have been the human star (for a few years, at least), but the real star of the show was the weaponized helicopter.  A feature film wouldn’t necessarily have to be intelligent, though as long as it’s smarter than Stealth, it’ll be okay.  Given that both Airwolf and Quantum Leap were created by Donald Belasarius, someone needs to get ahold of him and introduce him to the idea of motion pictures.

← RIP Ray Bradbury
Films Credited to the Producer, Not the Director →