Why We Need Another Tim Burton

Tim Burton has one of the most unique and identifiable styles of any filmmaker who has ever worked in Hollywood.  His films have distinctive features–protagonists who are largely loners, persecuted by society; characters tend to have pasty white faces with unkempt black hair (not unlike Burton himself); art direction is characterized by slanted doorways and checkerboard floors; camerawork is often like animated films, capturing odd angles and fluid movements that add a surreal quality to the cinematography; the tone of the films are generally darkly comedic, and even the horrific elements are broadly executed so that the violence and gore are done for mostly for cartoonish amusement rather than real terror.  He’s inspired goths for decades, yet is accessible to the general public.  It’s quite amazing that he’s had the success he’s had, considering that for all intents and purposes, his films should have limited appeal; however, his body of work has amassed nearly $1.7 billion, putting him in the top ten directors of all time (from a financial standpoint).

With Burton’s background in art and animation, it’s clear that his films have a distinctive artistic vision, one lacking in the work of many directors.  This is not surprising, since many filmmakers transition from other professions such as acting, writing, cinematography, or editing; of course others come out of film school and go to work directing smaller projects like music videos and television commercials, moving up the ranks to TV series or independent films before making the leap to big budget studio efforts.  Burton has been accused of being somewhat of a one-trick pony, repeating themes and style so that all of his movies tend to look alike, but this is what makes him stand out from the crowd.  If Spielberg is the Norman Rockwell of directors, then Tim Burton is the Bernie Wrightson.  The problem is that Burton made a name for himself doing strange original efforts like Pee Wee’s Big Adventure, Beetlejuice, and Edward Scissorhands, but seems to have made a more recent career out of doing remakes, re-tellings, or re-imaginings (including remaking his own work with Frankenweenie).  Of course, his biggest hit until recently was Batman, which of course was based on other material, but was one of the first superhero comic book adaptations to be successful–mainly because of Burton’s bizarre world building.  He seems content with continuing to apply his brand of visuals and characters onto known properties instead of creating something truly original again.  We need another director like him to take his mantle.

He is preceded by several filmmakers who had interesting, artistic flair to their films.  Terry Gilliam broke away from the Monty Python gang to direct his own stand-alone films.  Like Burton, he came from animation, and that heavily influences his work, which is largely fantastical and often surreal.  He’s had a sporadic career with several hits (Brazil, The Fisher King, Twelve Monkeys) and many flops (The Adventures of Baron Munchausen, Tide Land, The Brothers Grimm) and others that suffered major setbacks (The Imaginarium of Doctor Parnassus, the unfinished Don Quixote film with Johnny Depp).  There was also David Lynch, whose dark and bizarre Eraserhead kicked off a career of nightmarish, hallucinogenic films that created a genre all its own.  On the more commercial end of things, Joe Dante walked the line of horror and comedy with films like The Howling, Twilight Zone: the Movie and Gremlins, often teaming with Steven Spielberg.  Rather than being a cartoonist himself, his movies were influenced by cartoons he watched, primarily those from Warner Bros., which explains why Looney Tunes Back in Action and Small Soldiers are on his resume.  In fact, at one time, Dante was considered for the director’s chair for Batman before it went to Burton.  None of these directors had the success Burton has had, and it’s likely none will have any more hits on their hands (Gilliam still has projects in the works; Lynch is retired; Dante is now doing TV like Hawaii 5-0).

In the ’90s, Burton had competition in the visual filmmaking department from Jean Pierre Jeunet, Barry Sonnenfeld, and David Fincher.  Jeunet (with sometimes partner Marc Caro) made a couple of post-apocalyptic French films, Delicatessen and City of Lost Children that had comedic elements set among a stark dystopian setting.  Alien Resurrection killed his Hollywood career, but he bounced back with Amelie and A Very Long Engagement.  Sonnenfeld, coming from a solid cinematography career, became Burton-lite with a pair of Addams Family films, Get Shorty, and Men in Black.  Unfortunately, bombs like Wild, Wild West caused his career to spiral downward into dreck like RV and other straight comedies that forego any visual flair that he once had.  Perhaps Men in Black III will pull him out of that rut.  By contrast, Fincher has had the most success.  His movies rely mostly on visuals done by the camera rather on art direction like the others in this list, but his films usually take on a depressing, brown tone that is still evident in his most recent work, The Girl with the Dragon Tattoo.  His films have gone the mainstream route, though they still retain a Fincher feel; however, there is no mistaking Fincher’s films with those made by Tim Burton.

More recently, other filmmakers have emerged that have had their own distinctive flavor that are in the Burton realm in the fact that their films have a focused artistic vision–Darren Aronofsky, Tarsem Singh, and  Zack Snyder.  Aronofsky has worked almost exclusively in the independent cinematic world with his films Pi, Requiem for a Dream, The Fountain, The Wrestler, and most recently, Black Swan.  These films are dark and brooding, with surreal imagery sometimes mixing with documentary-style photography.  It’s perhaps no coincidence that he was also considered to take over the Batman series before Christopher Nolan stepped on board.   Singh, like Burton, had been an artist and this shows in his films–The Cell, The Fall, The Immortals, and Mirror, Mirror are all like paintings come to life.  It’s too bad that he isn’t very capable of telling a compelling story.  While Burton has been accused of not being a good storyteller (he even admitted that he can’t tell a good script from a bad one), his movies draw you into their world and transport you into your imagination.  Singh’s movies look good, but feel empty and soulless, often like a computer generated video game.  Speaking of which, there’s Snyder, who’s next project is a reboot of  Superman, Man of Steel (Burton was once attached to direct his own reboot of Superman, but the plug was pulled on it).  He works a lot in the realm of CGI, creating the entire worlds of his films in the computer with such films as 300 and Sucker Punch.  He has often been criticized for this approach, but there is no mistaking a Zack Snyder film.  Of course, the same can be said for Michael Bay. 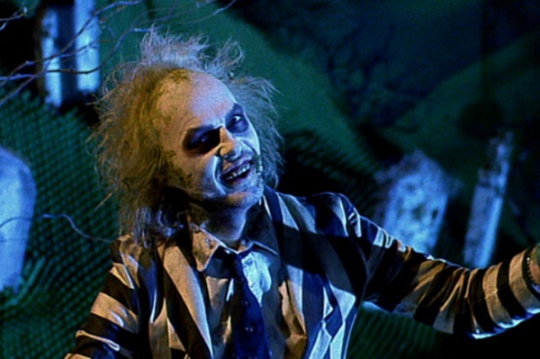 What we need is a new director who can mix horror with humor, who can put art direction and camerawork to his advantage using his own creative style, who can create movies that are highly imaginative and exciting to watch simply because they present the audience with new experiences unlike any that have come before.  Surely some directors are already doing this and have yet to be discovered by the world at large.  Or maybe Tim Burton can decide to stop rehashing old projects and regain the fresh perspective that made him a one-of-a-kind filmmaker and return to making original movies again.

← Films Credited to the Producer, Not the Director
Recent News Events That Parallel Movie Plots →

6 comments on “Why We Need Another Tim Burton”