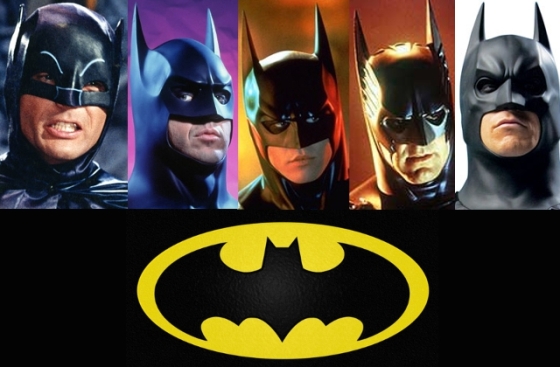 As expected, The Dark Knight Rises is one of the biggest movies of the year, closing in on a billion dollars worldwide with critcial support.  Bob Kane and Bill Finger created Batman for comic books in 1939, and the character has been with us in theaters and on TV in both live action and animation practically ever since.  The Cape Crusader’s popularity hasn’t waned, even after Joel Schumacher attempted to kill the series.

How much do you know about Bruce Wayne’s alter-ego on the silver screen?  Click the following button and take the Batman Movie Quiz.

In addition to 1943’s Batman, there was second serial in 1949 called Batman and Robin.  Robert Lowrey starred as Batman and Johnny Duncan as Robin.  Also featured: Jane Adams as Vicki Vale, Lyle Talbot as Commissioner Gordon, an uncredited Eric Walton as Alfred, and Leonard Penn as the villain The Wizard.

Catwoman made four live action appearances in feature films:  Julie Newmar in 1966’s Batman; Michelle Pfeiffer in 1992’s Batman Returns; Halle Berry in 2004’s Catwoman; and Anne Hathaway in 2012’s The Dark Knight Rises.  Of course, it’s debatable as to whether or not Catwoman is truly a villain.

Just one animated film was released theatrically, the aforementioned Batman: Mask of the Phantasm in 1993.

The first theatrical film (not counting the two movie serials) featuring Batman, Batman in 1966, was one of the first times that a TV series made the jump to the big screen.  The movie was intended to be released before the series premiered in order to promote the show, but instead was held off until the summer between the first and second season (the show only lasted two seasons).  In Europe, however, the film came out first due to a lag of when the TV show made it overseas.

Robin Williams was considered for the role of the Joker before Jack Nicholson took on the psychotic clown role.  Williams was again approached to play the Riddler for Batman Forever, but was turned down in favor of up-and-coming manic comedic actor Jim Carrey.

The Batman feature films have had four directors:

14 actors who played Batman villains had been nominated for Oscars (and several had won).  Of course, all but one was for movies other than the Batman films.  “Villain” means any character that could be considered to be an antagonist in  at any point in the film (spoiler alert!).  They are as follows (in alphabetical order):

* Information about the questions and answers taken from IMDb, Wikipedia, and Box Office Mojo.

8 comments on “The Batman Movie Quiz”