For Your Consideration – This Movie Critique

Posted by Stephen Wise on October 3, 2011 in Movie Critiques 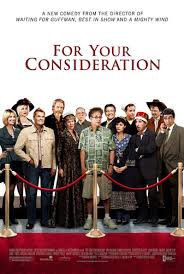 Christopher Guest has made a career from mockumentaries.  He co-starred and co-wrote This Is Spinal Tap and then went on to direct such fun films as Waiting for Guffman, A Mighty Wind, and Best in Show.  All of those had the conceit of being documentaries about people who only think they’re important.  For Your Consideration has a similar feel, though it plays more of a straight film than a mockumentary though it uses similar storytelling techniques than his previous films.  The strength of his movies has been a troupe of actors who improvised their lines to populate the sprawling cast of characters.  This is definitely intact here, and it’s fun to watch these actors at work.

The plot revolves around a low-budget film called Home for Purim being filmed that stars a couple of has-been actors (played by Catherine O’Hara and Harry Shearer) as well as two up-and-comers (Christopher Moynihan and Parker Posey).  Unsubstantiated rumors get out about Oscar buzz over three of the four cast members, causing them to react in humorous ways.  There’s also an examination of various other players in the creation of a movie, such as the director, writers, agent, publicist, producer, studio execs, etc.  It’s a fairly genial satire of the Hollywood machine, but there’s not much of a bite here.  In contrast, Guest’s 1989 film The Big Picture paints a much more cynical view of the movie industry.

For Your Consideration is split into two halves.  The first part details the production of Home for Purim and the reactions of everyone to the Oscar rumors.  The second takes place after the movie, now de-ethnicized into Home for Thanksgiving, has been released and the players involved are promoting the film and themselves.  Catherine O’Hara’s character has now undergone drastic plastic surgery that makes her all but unrecognizable.  That joke is played out far too much, especially since in the first half she comes off as a fairly realistic person.  Of course, that’s the point, that Hollywood dehumanizes those involved.  If it wasn’t for the one-note approach in the second half, O’Hara would’ve been an easy contender for an Oscar herself.  However, it is during this sequence when Harry Shearer comes to life and steals the show.  He is a joy to watch and I really wish he’d get more work outside Christopher Guest movies and voice work.

Overall, this movie is fun, especially for anyone with knowledge of the film business.  The main problem with it is that it’s a bit too light-weight.  Yes, we know people in Hollywood are superficial and that the industry is unfair to people, randomly making some stars while others with talent are relegated to play hot dogs in TV commercials.  For Your Consideration doesn’t really say anything new or reveal the true underbelly of Hollywood (for that, check out Hollywoodland).  It’s a pleasant way to spend 90 minutes and get your Christopher Guest fix until the next time he gets his friends together to play.