Movies That Are Surprisingly Sequels

We all know that Hollywood is sequel-happy.  In 2011 alone, there are 27 sequels planned for release, constituting over a fifth of all movies on the year’s slate.  Everyone expects that when a film does well, a sequel is soon to follow.  However, a few movies slip by that no one ever realizes is really a sequel.

Silence of the Lambs

Jonathan Demme’s suspense film about one serial killer assisting an FBI agent to catch another serial killer ate up the box office, coming in fourth place at the box office for the year 1991.  It also slayed the competition during the Oscars and took home five of the little golden men.  It spawned a sequel and two prequels.  However, one of the prequels, Red Dragon, was a remake of… 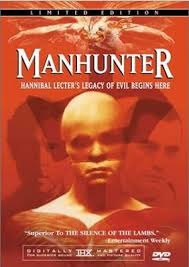 Anthony Hopkins wasn’t the first actor to play Hannibal Lecter.  That honor goes to Brian Cox (though the character’s name in that film was spelled Hannibal Lecktor).  Unfortunately, no one remembers Cox’s performance (which rivals Hopkins’ in the creepiness factor) simply because no one saw it.

The Bruce Willis bullet fest was based on the book Nothing Lasts Forever by Roderick Thorpe.  There are a few differences, mainly being that the main character is not John McClane but retired detective John Leland and he’s going to Los Angeles to visit his daughter, not his wife.  However, he is divorced from his wife where in the movie the two are separated.  Other than these cosmetic changes, the plot is exactly the same.  All of the supporting characters have the same names except that Hans Gruber is “Little Tony” Gruber.  Even the daughter has the last name of Gennaro, McClane’s wife’s maiden name in the film.  Why point all this out?  Because this wasn’t the first time that John Leland AKA John McClane appeared on screen.  The first was in… 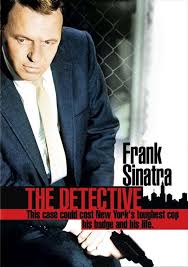 Nothing Lasts Forever was a sequel to Thorpe’s previous novel The Detective, which was made into a film in 1968 starring Frank Sinatra.  Due to his contract, which stated that he had first dibs on any sequel, Sinatra was offered the role in Die Hard.  He turned it down since he was 73 years old.  Too bad, since that’s a movie we’d pay to see.  Regardless, the sneaky producers still found a way to put Sinatra in the film. 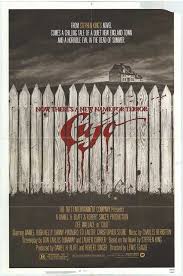 Even if you’ve never seen this Stephen King adaptation starring ET’s mom, the Who’s the Boss kid and a Volkswagen Beetle, you know that Cujo is a rabid Saint Bernard.  It’s in our cultural lexicon.  What most people don’t realize is that King has this nasty habit of linking all of his stories together.  A number of his books are set in the fictional town of Castle Rock, Maine (later he moved to Derry).  Cujo is the second one to use that setting.  The first was… 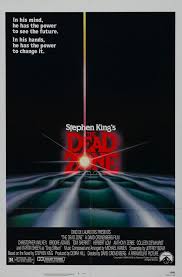 That’s a tenuous connection, you say?  Well, how’s this?  In The Dead Zone, accidental psychic Johnny Smith goes to Castle Rock to help Sheriff Bannerman (played by Tom Skerritt) to track down a local serial killer.  That very same Sheriff Bannerman is then killed by a certain dog with a foaming mouth.  Only this time, he’s played by the late Sandy Ward.  In the continuity of the Stephen King universe, the deceased Bannerman is replaced by Sheriff Alan Pangborn, who investigates murders involving horror writer Thad Beaumont in The Dark Half.  Pangborn then sees his beloved town destroyed by the devil in Needful Things.  It’s too bad that Rob Reiner decided to transplant Stand By Me to Castle Rock, Oregon, otherwise it would’ve been a prequel to all four of those films.  Another lost connection was Kiefer Sutherland’s character of Ace Merrill was supposed to eat it in Needful Things, but Chuck Heston’s son, who directed the flick, decided to leave that character out.  He could’ve been played by Donald Sutherland! 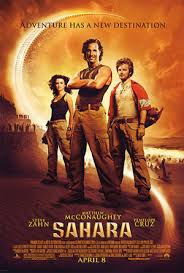 This big budget bomb starring Matthew McConaughey and Penelope Cruz was the second film based on a Clive Cussler novel.  The first was…

Both movies followed the adventures of Dirk Pitt (has there ever been a manlier name for a character?), but Cussler hated the first movie so much that he didn’t want Hollywood to adapt any more of his books.  Eventually, he relented and allowed Sahara to be produced—and hated that movie, too. 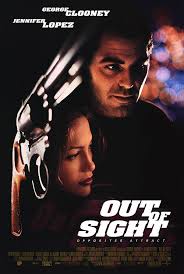 This George Clooney/Jennifer Lopez thriller was based on a novel by Elmore Leonard as well as being the basis for the short-lived TV series Karen Sisko.  It featured a cameo by Michael Keaton as a character he first played in… 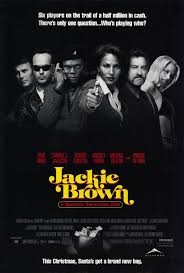 The Quentin Tarantino flick was also based on an Elmore Leonard novel which took place in the same universe, as indicated cinematically by the Keaton crossover.  A bit of trivia with Out of Sight is that up to that date, it was the only film to feature two actors to have played Batman. 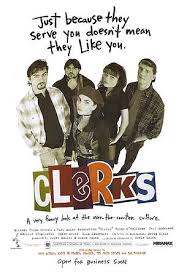 This one is a bit of a cheat, since we all know that this was the first Kevin Smith film.  We also know that his movies all tend to tie together, if nothing else because of Jay and Silent Bob showing up here and there.  What most people fail to realize is that his second film was actually a prequel to Clerks, which was… 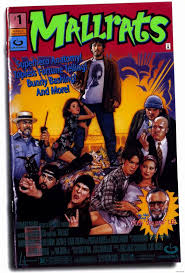 It took place the day before the events depicted in Clerks, leading up to the beginning of that film.

Enemy of the State

This one has been open to debate.  Tony Scott’s espionage film has Will Smith being chased by government agents using security cameras and hidden microphones that apparently populate our world (surely we’re safe from unsuspecting recording, aren’t we?).  He teams up with Gene Hackman, who’s a depressed, isolated government surveillance expert with horn-rimmed glasses.  This character is EXACTLY the same as a character he played 24 years earlier in…

In that film, Gene Hackman played a depressed, isolated government surveillance expert with horn-rimmed glasses.  Sure, the characters have different names and the movies are made by different studios, but so what?  Every indication is that he’s playing the same character.  After all, couldn’t he be going by an alias since he’s so paranoid?

2 comments on “Movies That Are Surprisingly Sequels”