Most Annoying Things About the 2012 Presidential Race

Posted by Stephen Wise on October 9, 2011 in Other Oddities, TV

Any time you turn on CNN, Fox News, MSNBC, or the major network news shows, there’s a good chance that you’ll be hearing about the 2012 Presidential election (HLN doesn’t count because all they broadcast is this week’s trial of the century).  Everyone knows politics is dirty.  The country’s in a mess so the Republicans blame President Obama and Obama blames Bush.  That’s typical, as this kind of finger-pointing has been going on for centuries.  But the continual coverage of the race has shown some especially irritating points.  In particular, how the candidates have used (or attempted to use) the media, and how the media has manipulated the candidates in return in addition to some simply goofy things unique to this contest. 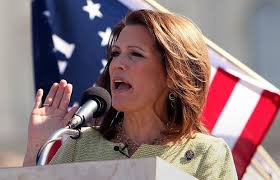 We know that the Republican candidates all hate Barack Obama.  That’s a given.  They’re going to say everything they can about the President because they want his job.  Michelle Bachman tends to want to bring up Obama and his policies every chance she gets, which is her right.  It’s how she says his name that’s grating–her nasally, precise pronunciation drills into one’s sinuses.

Rick Santorum whining about not being given equal time in the debates. 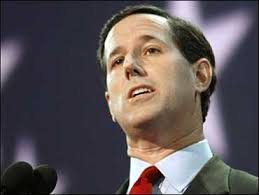 We’ve had numerous GOP debates so far that includes all the major candidates (sorry, Gary Johnson).  The newscasters running the debates tend to give more questions to the frontrunners; after all, if more people are interested in those candidates, why would we want to listen to the others?  Each candidate, despite their ranking in the polls, are given a certain number of questions to answer.  That’s not good enough for Rick Santorum, who has griped and complained about not getting the same face time as Rick Perry or Mitt Romney.  He nearly threw a tantrum about this during one of the debates, coming off sounding like a spoiled little kid who didn’t get his way, and he continued this in several interviews.  Sorry, Rick, but the future leader of the free world shouldn’t be acting like a child who’s getting ready to take his ball and go home. 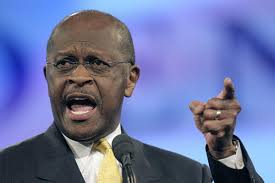 The big issue right now is the economy.  All the GOP candidates are screaming about their plans to re-employ people (primarily, it seems, millionaires).  Obama is trumping up his jobs plans.  Random unemployed people are protesting on Wall Street.  Herman Cain promotes himself as a non-politician businessman who knows how to fix the broken economy.  Perhaps he does.  He certainly won’t stop talking about his “999 Plan.”  It might be good, it might be useless.  It doesn’t matter, because every time he opens his mouth, out comes “999 Plan” no matter what the topic.  We get it–you think this plan works.  But it doesn’t take much to beat something to death.  If the public hasn’t gotten sick of hearing about it, that will soon happen.

Sarah Palin recently announced that she will not seek the Presidency in 2012.  For months, she’s been playing with the press making everyone wonder if she was going to run or not.  She made impromptu appearances at the states where straw polls were going on, upstaging the official candidates while driving around the country in a bus with the Constitution painted on its side.  Why?  It’s obvious–to draw attention to herself with her One Nation Tour.  Why would she do this if she wasn’t running for office?  Given that she has made millions for giving speeches, is it any wonder that she wants to promote herself, even at the detriment to those who are serious about their campaigns? 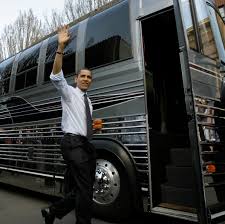 President Obama hasn’t officially started campaigning yet.  That hasn’t stopped him from campaigning, however.  In August, he followed Sarah Palin’s lead and traveled to several Midwestern states to promote his jobs plan.  In a bus.  At least it didn’t have the Constitution plastered on the side, but he did get flack when it was revealed that his entire bus entourage was made in Canada.  So much for American jobs.  Regardless, he maintains that his tour was to push his proposal to get American to pressure Congress to vote for his plan, not as a ploy in his re-election campaign.  Naw, he wouldn’t campaign at the taxpayer’s expense.  Of course not.

Newscasters not understanding that no means no.

New Jersey Governor Chris Christie made a name for himself when Hurricane Irene ripped through the northeast coast.  Despite his weight, he became a media darling with his no-nonsense toughness, no-holds-barred directness, and self-deprecating sense of humor.  People immediately started calling for him to throw his hat in the ring and run for President.  However, he repeatedly said that he wasn’t interested.  That didn’t seem to matter to newscasters, who constantly said he “left the door open” for the possibility.  His reaction was to say, “What do I have to do outside of threatening to commit suicide to convince people I’m not running?”  Apparently, actually commit suicide since the pundits didn’t count him out until he made his official announcement to say–again–that he was not running.

Too much time spent on worrying about who is running.

While on the subject of Governor Christie, it seems that half of the time the newscasters spend on reporting the Presidential race is talking about who might run rather than who is actually running.  For the longest time, there was speculation that Donald Trump was going to run, given the fact that he was everywhere in the media.  For a while, it seemed that all CNN or Fox News could talk about was whether or not he or Sarah Palin were going to run while those two were in all likelihood laughing at the media.  After all, Trump had a TV show to promote and Palin not only had a successful run with speeches, but has had her own TV shows as well.  Both had a lot of financial gain to be had by this unsolicited promotion.  They were constantly put in polls even though their position as a candidate was uncertain.  Trump was the first to bow out, and Palin, typical of trying to steal the thunder of others, announced her non-running the day after Christie officially became a non-candidate.

The GOP seems to spread catch phrases faster than SNL.  President Obama gave an interview where he talked about wanting to raise taxes for the richest Americans and suddenly Republicans start throwing around the term “class warfare.”  It’s become a rallying cry.  They also referred to rich people as “job creators” for the reason that people with money are the ones to invest in companies, or be the ones running the companies that would hire people.  Of course, this is a one-sided perspective.  It doesn’t matter, though because once one person threw out that term, everyone had to start using it despite how ridiculous it may be to those people without jobs.  Similarly, newscasters are quick to pick up expressions like that.  You can turn on any channel and hear the anchors and pundits alike using the exact same terms.  As mentioned previously nearly every news show used the same phrase regarding Christie as “leaving the door open.”  Those words just became accepted in the lexicon of politics.  You’d think the media was made up of teenagers coming up with their own slang.

The media putting candidates on a pedestal and then tearing them down.

There’s nothing the media likes better than to make someone a star and then see them fail.  We see that with entertainers all the time.  The same is done in politics.  They look for a hero, someone who they can talk up and spend hours of television time espousing about how wonderful this person is.  However, that only goes so far.  At some point, the media realizes that their crown prince has been on the throne too long and they start working toward de-throning them.  Michelle Bachman was Wonder Woman until her golden lasso became tarnished.  Rick Perry was the Lone Ranger though now it looks like he’s being sent riding into the sunset.  Herman Cain is riding a wave of popularity, but now every effort is being made to find something controversial about him to stir things up.  The media thrives on conflict, and if there isn’t any to be found, they’ll do what they can to create it.  The press is there to be a watchdog organization, to keep those in power in check from abusing that power.  However, in today’s society, the press has become a participant.  Gone is objectivity; the media sees itself as responsible for choosing for us.

How do you prove who’s the best?  Statistics!  Every news outlet seems to have daily polls.  They run their own polls or quote polls from other organizations.  Rick Perry jumped to the top of the polls once he entered the race, but this was the day after Michelle Bachman won the straw poll in Iowa.  How could she win one poll but Rick Perry was showing having the lead in another?  The straw polls take a snapshot of people who attend a particular event in a specific town and choose from those candidates who decide to take part in that poll.  Hence, you have Herman Cain winning the straw poll in Orlando, Mitt Romney taking the top spot in Michigan, and Ron Paul creaming the competition in Washington.  Gee, if you based your opinion on who’s the front-runner on straw polls, practically every candidate can claim the position.  So we have to fall back upon the polls the networks quote.  Of course, they never tell you who exactly took part in these polls.  Are they nation-wide or in a select part of the country?  Are the polls open to everyone, or have they carefully looked at demographics?  Are they open to Republicans only or to all voters?  Are they for viewers of their programs or visitors to their websites who are possibly predisposed to a particular political point of view?  Nope, all we get are the results which can mean anything so are essentially meaningless.  But it’s a good thing to know a year before the election who the news is telling us is going to win.