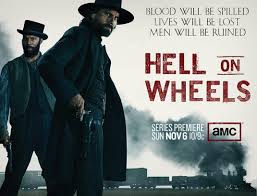 Hell On Wheels sounds like a subtitle for a Ghost Rider movie or something about bikers like Sons of Anarchy, but it’s really a new western TV series on American Movie Classics (as much of an oxymoron as live action shows on Cartoon Network).  It’s paired on Sunday nights with AMC’s biggest hit, the terrific zombie show The Walking Dead.  At first glance, it doesn’t make much sense to team up a horror story with a horse opera, but both shows are similar in nature–sprawling, ultra-violent epics with an ensemble cast.  Despite the clash of genre, they fit together surprisingly well.  AMC is getting known for cutting-edge original entertainment as it’s also home for the award-winning series Breaking Bad, Mad Men, and The Killing.  Hell On Wheels does not disappoint as its newest member in this exclusive club.

The story is set a short time after the close of the Civil War as the country is expanding west, thanks in large part to the laying of railroad tracks across the frontier.  The show’s title comes from the moving “town” of workers who live in extreme conditions as they build the foundation for the nation’s future.  The main character is a former Confederate soldier, Cullen Bohannon (Anson Mount), who murders a man in a church confessional in the opening scene.  It turns out that Cullen is tracking down Union soldiers who murdered his wife during the war.  This leads him to the railroad company, where his next target works as a foreman.  Cullen is put in charge of a team of former slaves since he once was a slave owner himself, though it turns out that he had freed his slaves a year prior to the War and seems to be more progressive in terms of race relations than those who fought for the North.  However, he is put in conflict with one of his workers, Elam Feruson (Common), who doesn’t like being treated like he’s still a slave.  The two end up being united by murder, which will apparently be one of the major plot threads as the series progresses.

The show alternates between Cullen’s story and that of the owner of the railroading company, “Doc” Durant (Colm Meaney), who is an enjoyable villain.  He buys off politicians, revels in his shady shenanigans, and brutally assaults those who dare to cross him.  His plans to build the tracks is naturally based on greed, as he will bilk the U.S. government out of tons of money.  However, his plans are way-laid when one of his employees is killed by an Indian attack.  The man’s wife, Lily Bell (Dominique McElligott), escapes with some architectural designs that Durant needs.  According to the next episode’s previews, these two will cross paths.  At some point, it’s expected that Durant will also end up meeting Cullen and create conflict, but so far their plots have been separate.  There are also some supporting characters that have been introduced but have yet to have any importance such as a local minister (Tom Noonan), a religiously converted Indian (Joseph Black Moon), and a pair of Irish brothers (Ben Esler and Phil Burke).  These guys will surely have a more integral role in the series than in the pilot episode.

There’s a lot to like about this show.  The HD cinematography is beautiful, with a bleached-out color palette that fits the tone perfectly.  The locations capture the time period and creates the sense that these people are living far from civilization.  The sets, costumes, and props are similarly perfect for the period.  The problem with many Westerns is that they either mythologize that era in our history or have a stodgy feel that is lost among modern viewers; however, Hell On Wheel has an immediate feel and is definitely contemporary in its approach.  The violence is gruesome and bloody–we see explicitly the effects of bullets, arrows, and knives.  The show doesn’t shy away from sex, either as there is a troupe of prostitutes who follow the rail workers (it is in their midst that the minister sets up shop), but at least in the pilot it’s not explicit or exploitative.

The performances are engaging.  Mount effectively carries the show as a morally ambiguous hero (or maybe anti-hero) who is out for revenge and isn’t afraid to kill, embraces the love and loss of his wife, and has a code of ethics higher than others around him.  Common is very watchable, and there is chemistry between him and Mount; it will be interesting to see how their relationship grows, whether they’ll be friends, allies, partners, or something else.  Meaney is fun as he comes oh-so-close to chewing the scenery, and is obviously having a blast with this character.  It’s great to see the always interesting and highly underrated Noonan in a role that’s unusual for him unless the reverend turns out to be a wacked-out character.

This series is ambitious in what it’s trying to accomplish.  It could have been a straight-forward revenge tale, but it also tries to cram in social statements about the plight of both African Americans and Native Americans during the Reconstruction.  This wasn’t a proud moment in U.S. history on either fronts.  The show is also commenting on corporate greed, something that’s relevant with current events.  Long-form entertainment like a television series is a great venue to develop themes such as these, assuming the writers don’t try to throw too much at the audience (as the pilot tries to do) and if they don’t jump on soap boxes with simplistic solutions.  There is also the danger of being overcome by stereotypes–the Cheyenne attack as depicted could have come out of an old racist movie, and could the Irish brothers have been named anything but Sean and Mickey (except maybe Paddy)?  At least there wasn’t a prostitute with the heart o’ gold (not yet anyway).

This show has the potential to develop great characters, a compelling ongoing saga with terrific production values, assuming it doesn’t go the way of a soap opera.

One comment on “Hell On Wheels – AMC’s New Vehicle”