When the original Star Wars hit the movie theaters in 1977 and became a worldwide sensation, George Lucas milked his creation in what seemed to be every means possible–toys, T-shirts, a story album, and the infamous holiday special on TV.  As previously chronicled, Star Wars has given us entertainment in every conceivable medium except for one–live theater.  In recent years, there has been a trend to convert movies such as Disney cartoons, low-budget Roger Corman horror films, quirky John Waters flicks featuring transvestites, Mel Brooks comedies, and ’80’s music-oriented non-musicals into stage plays (often turning them into musicals to boot!).  The closest we’ve gotten to Star Wars live is the recently revised Star Tours simulator ride at various Disney theme parks and the amazing Star Wars in Concert where a live orchestra performs music from the movies in front of a giant LCD screen that plays scenes from the films.  As of yet, Star Wars has not been turned into an actual stage play, and there are some who would say that it cannot be done.  But it can, and it would be incredible.

Obviously, there are major hurdles to overcome, like scripting the story, portrayals of the characters, staging the action, showing the vast array of sets and locations on a fixed stage, and depicting the special effects.  Star Wars is an epic space fantasy that takes place on multiple planets, the Death Star, and various space ships, so translating that for legitimate theater would be challenging.  However, if they can make Spider-man: Turn Off the Dark work, then this is a no-brainer.

Of course, the obvious place to start is with what is now known as Episode IV: A New Hope, though for a stage performance that title might be superfluous.  Even though most film-to-plays transform to musicals, in this case that is unnecessary because not only would the addition of songs to the play expand the production to an over-bloated length, but fans would inevitably react more negatively than they do to Lucas’s often tinkering of the films.  However, the music by John Williams is a critical part of Star Wars‘s success, as Star Wars in Concert demonstrates.  A live orchestra is instrumental in making this production spectacular.

Stage plays generally have a long first act that sets up the conflict and serves as exposition; after the intermission, the play resumes with the second act that shifts the focus to another location, time, or action; then concludes without a break (other than possibly a closed curtain or moment of darkness) with a short third act that serves as the climax and resolution.  For Star Wars: The Play, Act One will dramatize everything leading up to Luke, Han, Chewie, and Obi Wan being drawn to the Death Star on the Millennium Falcon.  Act Two features their rescue of Princess Leia and subsequent escape to the Rebel base.  Act Three is the fighter attack on the Death Star culminating in its destruction. 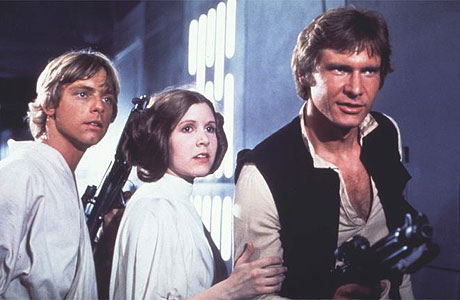 The human characters are easy–after all, who hasn’t imagined themselves being Luke, Leia, or Han?  Casting these iconic roles is very important, of course, but there will be a seemingly endless line at the auditions providing easy pickings of actors.  For the film, it was important to cast unknowns, but the stage production can indulge in celebrities starring in the show.  It would be interesting to see what contemporary stars could do with those characters.  The difficulties are with the costumed characters.  The costumes for the movies were hot and often clumsy.  Anthony Daniels often complained about his difficulties wearing the C3PO suit.  Kenny Baker was inside the metal can of R2D2 for certain shots when they weren’t using puppets or radio controlled robots.  Remote control is the only practical way to have R2 appear on stage.  For the play, costumes need that allow free movement (especially for Darth Vader, who needs flexibility for the light saber fight) and will not suffocate the actors or cause heat exhaustion.  These costumes also need to look cool on stage and cannot be too different from what we’ve seen on screen.  Some of the aliens in the cantina can actually be puppets controlled by puppeteers hidden from the audience to give an enhanced other-worldliness to them.

Due to the scope of the story, the action needs to leave the confines of the proscenium.  Shows that bring the action out into the audience is always crowd pleasing–Spider-man swinging from his web or the chandelier falling during Phantom of the Opera–so this will be the ultimate expression of the technique.  In addition to the main stage, multiple platforms at various levels positioned to either side of the stage will be used for quick and easy transitions from one location to another.  For instance, the kitchen where Luke eats with his aunt and uncle can take place on one such platform with its own lighting to focus only on that sub-stage.  These platforms will come in handy for the scene where the storm troopers shoot at Luke and Leia as they swing over the apparently bottomless pit.

Meanwhile, the primary stage will have a giant LCD screen like one used in Star Wars in Concert on which various landscapes and star fields will be projected.  For instance, when the droids are walking through the desert of Tatooine, the screen will show video of the sandy vista with costumed actors on the stage in front of it.  Similarly, the sides of the theater house will have smaller screen affixed to the walls so that when certain scenes such as space battles play out, these screens will go “live” to create a wrap-around feel for the audience.  Additionally, this production will feature something never before seen by a theater audience–a screen attached to the ceiling over the seats.  The opening shot of A New Hope of the star destroyer flying over the camera and seeming to go on forever is one that is etched in the minds of generations.  This cannot be foregone for the play, but recreated where the ship literally goes over the heads of the audience.

The various platforms and screens allow freedom to tell the complete story including all the locations required by the plot.  However, there still needs to be a quick and effective method of changing the sets.  The best way of doing this is to have moveable set pieces that extend from the wings and retract when not in use.  There are times when the main stage needs to be empty for the background screen to set the location.  The biggest challenge will be in staging the X-wing attack on the Death Star and the dog fight with the TIE fighters that ensues.  This will be accomplished by hanging mockups of the X-wings over the main stage from a complex wire system from above–essentially giant marionettes with actors inside.  Each fighter is controlled separately so that when they “explode” (using lighting and limited pyrotechnics) they can be removed to the wings.  The TIE fighters will be represented on the screens on the side walls with the exception of Darth Vader’s fighter, which will make use of one of the side platforms.  The final showdown will be a fast-paced extravaganza where the audience’s attention will be directed all over the theater accompanied by an awe-inspiring light show.

With the use of video screens and certain set pieces like the hanging X-wings, much of the special effects will be taken care of.  However, there are still light sabers and laser blasts.  Light sabers are fairly easy–just use wands with internal lighting that are able to withstand repeated blows.  However, the blades will need to expand from the handles as shown in the film.  The trick is to construct a device that has a translucent blade that can be housed in the handle when “off” and somehow extend and then light up with an internal glow.  Unrealistic retractable toy light sabers have been around for a long time and there is a light saber toy that simulates the up and down lighting effect.  It is not inconceivable that a prop that serves the production’s needs can be constructed.  As for the lasers, it is easy to insert actual lasers of the pointer variety into the barrels of the blasters used by the actors.  The problem is making the laser beam visible to the audience.  This can be solved by flooding the stage with a fine layer of fog that does not obscure the actors yet creates just enough atmosphere for the lasers to show up.  Sound effects add so much to the visuals, so the blasters will need to be equipped so that when the trigger is pulled, the familiar “pew” sound will broadcast over the speakers.

With the multiple stages allowing actors movement throughout the theater, video screens, impressive sets and effects, and live orchestra, this play will be a total immersion into the Star Wars universe that the audience will never forget.

Oh, and George Lucas, feel free to use this concept.  You have the resources to make it happen.