Observations of the 2012 Emmy Nominations

Earlier this week, the 2012 Emmy nominations were announced.  As is typical, there were snubs and surprises with the usual expectations.  Here are a few observations from this year’s list of potential award winners.

If You Want Drama, Go To Cable

Of the six shows nominated for Outstanding Drama Series, the only one that was from an over-the-air broadcast network was Downton Abbey, which aired in the U.S. on PBS, though it is originally a British program (or is it programme?).  HBO and AMC has two shows each–Boardwalk Empire and Game of Thrones for HBO, Breaking Bad and Mad Men for AMC (not bad for a network named American Movie Channel).  Showtime has a sole entry, Homeland.  It seems that the days of the Big Four (ABC, CBS, NBC, and FOX) putting out award-winning dramas is over.  Part of the problem is that they produce safe, traditional TV shows for the consumer who wants comfort television.  Turn on NCIS or Law & Order: SVU or Blue Bloods (is that show still on the air?) and you’ll pretty much get the same thing week after week.  The characters will act the same, the plots will be resolved in a similar manner, and no real surprises happen unless a cast member departs.  With these nominated series, you never know what to expect.  It is true drama where you can expect to be riveted and moved, and not just have TV wash over you.

The same can be said about the performances in dramas as well.  The lead actors nominated for dramas all come from one of these shows with the exception of Michael C. Hall from Showtime’s Dexter.  Was Hugh Laurie snubbed in his final season of House?  He’s a terrific actor, but he was nominated six times previously for that role–and let’s face it, he hasn’t brought anything new this season that he didn’t already do.  Even the supporting actors in dramas are limited to one of the nominated shows.  These series have amazingly talented casts, and nothing against the supporting actors from CSI or…what other dramas are on broadcast television?

Women fared a little better with Kathy Bates from NBC’s now-cancelled Harry’s Law and Emmy regular Julianna Margulies from CBS’s The Good Wife.  Both are solid actors, and with Glenn Close from FX’s Damages, there’s competition for the women from the nominated dramas.  It seems that broadcast networks are kinder on women, offering a better chance at getting juicy roles.  Or at least they do on The Good Wife, which offers two supporting actress nominations in Archie Panjabi and Christine Baranski.  The rest of the supporting noms?  You guessed it–from the cable shows.

Comedies Are Getting Stale 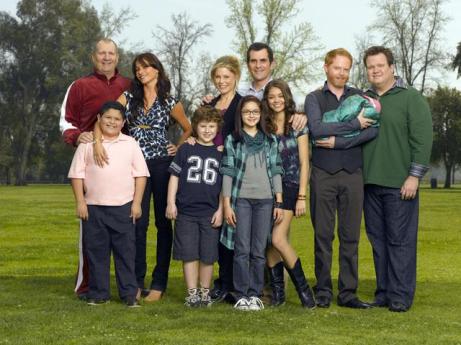 Remember when Modern Family took the airwaves by storm and caused such an excitement in viewers and with the Academy?  Well, that was two years ago, which in Hollywood terms is an eternity.  This admittedly brilliant show just finished its third season and is starting to show signs of fatigue.  In addition to Modern Family, three other nominations for Outstanding Comedy Series are long-timers: The Big Bang Theory, Curb Your Enthusiasm, and 30 Rock.  These perennials are probably the funniest shows on TV, but there’s not much fresh about them.  The two newbies are (surprise, surprise) from HBO–Girls and Veep.  While cable allows the characters to swear and show skin, it also allows for the writing to be sharper and try out more extreme ways of storytelling that the broadcast networks just can’t do, or when they try they get Suburbia or the awful Two Broke Girls (the opening scene of the pilot was both insulting and offensive).

As expected, the lead actors, both male and female, of these shows have earned their own nominations.  This isn’t surprising since sitcoms depend on their stars.  If the stars are funny, then so are their shows, and it’s hard to say a show is the best on TV without honoring its cast.  Several leads have been nominated without their shows being up for an award, primarily in the actress category: Zooey Deschanel from New Girl, Edie Falco from the cancelled Nurse Jackie, Melissa McCarthy from Mike & Molly (surely cashing in on her Golden Globe and Oscar good will), and Amy Poehler from Parks & Recreation. For the guys, there’s Don Cheadle from Showtime’s House of Lies, Louis C.K. from FX’s Louis, and Jon Cryer from Two and a Half Men.  Wait a minute–Jon Cryer?!?  Has anyone in the Academy actually watched Two and a Half Men this season?  Cryer’s performance has degenerated from that of the long-suffering straight man to a pale parody of his character.

The supporting categories are rather skewed because the ensemble cast of Modern Family has decided en masse to be put in this category rather than single out one or two of them as the leads (good for them).  Unfortunately, this means that there’s only two slots available in the male category with four in the female category.  Though typical of Hollywood, none of the four young actors on the shows (who truly could be listed as supporting cast) are recognized for their work.  It can be argued that while not as seasoned as the adult actors on the show, these kids are superb in their performances and are just as important to the success of the show.  But because they’re minors, they are ignored by the Academy and by the industry as a whole.  It’s great to see Mayim Bialik recognized for her role on The Big Bang Theory.  The late Kathryn Joosten is nominated for her role in Desperate Housewives, which is debatable to be considered a comedy.

The 37-year-old sketch comedy show has been a consistent source of comedic actors who transition from the show into their own television series or to the big screen.  Some of our biggest movie stars got their start on SNL–John Belushi, Dan Ackroyd, Chevy Chase, Bill Murray, Eddie Murphy, Billy Crystal, Martin Short, Mike Meyers, Chris Farley, Adam Sandler, Will Ferrell, and most recently Kristin Wiig to name a few.  However, the show has had its ups and downs through the years.  The last decade or so has shown that Lorne Michaels’s brainchild is a machine that runs on entropy; it has its proven formula and format that never wavers.  As such, SNL is like your grandmother’s chocolate cake–it may taste good, but it’s so familiar and comfortable that its taste loses all meaning.  In recent years, the show has become a shadow of its one time glory and has become all but unwatchable.  Except somehow, it continues to not only plod on, but actually generate some moments of inspiration if not brilliance.  This is reflected in its 6 Emmy nominations: Outstanding Variety, Music, or Comedy Series; Bill Hader for Supporting Actor in a Comedy Series; Kristin Wiig for Supporting Actress in a Comedy Series; Maya Rudolph and Melissa McCarthy for Guest Actress in a Comedy Series; and Jimmy Fallon for Guest Actor in a Comedy Series.  It’s interesting to note that both Hader and Wiig are leaving the show, Rudolph and Fallon are former cast members who returned to host, and McCarthy is being praised all over the place.  It makes one wonder as to the reason behind these Emmy nominations.

The former Family Ties and Spin City star is up for two Emmys this year, Guest Actor in a Comedy Series for Curb Your Enthusiasm and Guest Actor in a Drama Series for The Good Wife (proving that not only women on that show are acclaimed).  Since being diagnosed with Parkinson’s, Fox has largely been in retirement except for a few guest appearances here and there.  Each time he shows up, it’s an event because he’s so well loved and is extremely talented.  He can entertain effortlessly, despite his body betraying him.  Let’s hope that these nominations are for his peerless acting skills and not because he is forced to perform with a crippling condition.

Movie Stars Are Guaranteed a Nomination 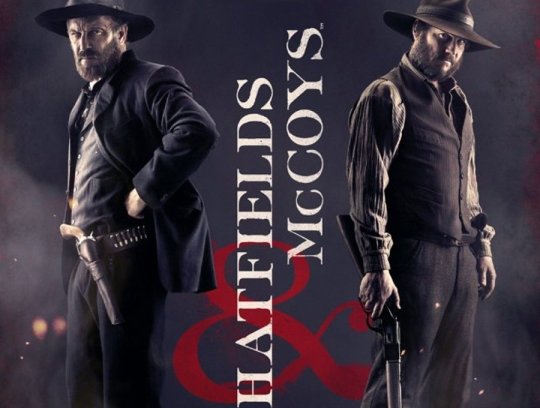 Once upon a time, TV stars stayed on the small screen and movie stars never slummed it in broadcast entertainment.  Those days are long gone.  Movie stars (especially ones who may be on the decline, or actresses in general who want meaty roles) often find compelling work with TV movies and mini-series.  The following actors who made a name for themselves in film have been nominated in various categories:  Tom Berenger, Kevin Costner, Judy Davis,  Idris Elba, Woody Harrelson, Ed Harris, Ashley Judd, Nicole Kidman, Jessica Lange, Julianne Moore, Clive Owen, Bill Paxton, David Strathairn, Emma Thompson, and Mare Winningham.  Imagine a feature film starring that cast?

Conan, Leno, and Letterman are MIA

All the hoopla over the David Letterman/Jay Leno feud and the Jay Leno/Conan O’Brien feud seems very, very distant given the fact that none of their shows are on the Emmy roster for Outstanding Variety, Music, or Comedy Series, especially considering The Late Show with Jimmy Fallon (which succeeded both Letterman and O’Brien), Jimmy Kimmel Live! and Saturday Night Live are all nominated.  Leno’s absence is no surprise–does anyone really think he’s funny?  Letterman has now been on the air longer than Johnny Carson, and his acerbic wit seems muted these days.  Even O’Brien’s new show on TBS, which is far superior to his version of The Tonight Show, seems lost in the mix.

The Academy Has No Clue Regarding Animated Shows

Bob’s Burgers was nominated for Outstanding Animated Program.  Let me repeat that: Bob’s Burgers was nominated for an Emmy.  I’m sure it must have its fans.  It’s somehow been renewed.  Granted, it’s better than FOX’s other attempts at retaining its Animation Domination timeslots such as Napoleon Dynomite and the horrid Allen Gregory, but that’s not saying much.  Seth MacFarlane’s American Dad received a nom when Family Guy didn’t.  The never-ending The Simpsons has been nominated in this category for nearly every one of its 24-year existence, winning 10 times (along with countless other Emmy nominations in different categories and non-Emmy awards).  It received this year’s nomination despite giving us the worst Treehouse of Horror episode ever.  Did The Simpsons make the cut simply because it’s been around forever?  Then we have The Penguins Of Madagascar: The Return Of The Revenge Of Dr. Blowhole.  Seriously?  Where is the most original and creative animated series currently on the air–Adventure Time?  Where’s the innovative and cutting edge Robot Chicken?  Where’s the funny and irreverent Mad?  Where’s Star Wars: The Clone Wars, that has proven to be a huge improvement to the prequel films and has grown increasingly darker and more mature with each season?  But hey, Bob’s Burgers and Penguins of Madagascar were nominated!  At least they didn’t overlook Futurama.  There’s some hope in the world.

← In Remembrance…
Ham and Jam and Spam a Lot →

6 comments on “Observations of the 2012 Emmy Nominations”